When Grayson Cybulski decided to make his entrance on Monday, Dec. 3, mom Lauren McGonigal and dad Josh rushed to the Almonte General Hospital from their home in Arnprior not knowing what the next few hours would hold.  After several hours on the Obstetrics Unit, staff determined that Lauren needed to have a Caesarean section. 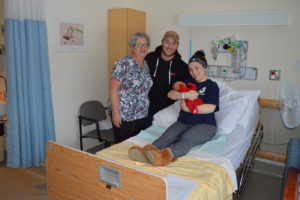 With Dr. Elliot Cohen handling the operation, Dr. Heather Abramenko looking after anesthesia and nurses Heather Clement, Sherry Scissons and Brooke Guthrie assisting, Grayson was brought into the world safely at 6:24 p.m. The first child for Lauren and Josh.

What the proud parents didn’t know until everyone was safe and well looked after was that they had just become the first family to benefit from the brand new  Surgical Lighting System that had just been installed in the Obstetrics (OBS) operating room.  According to Maureen McLeod Frazer, the Manager of OBS, as well as the Emergency Department and the Operating Room, the 15-year-old lighting system it replaced was beginning to present challenges for the staff. 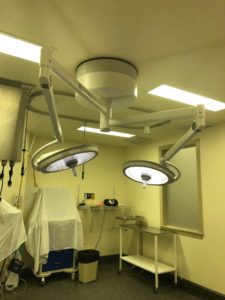 “The only way to dim or brighten the lights,” said McLeod Frazer, “was for the circulating nurse to do it with switches located on the wall, nowhere near the patient.  The doctor couldn’t do it, which was frustrating.  We had tried to have repairs done but were not successful.  On top of not being able to adjust the brightness, the arm was difficult to lock down so it would occasionally start to shift during the procedure.”  Although these things never compromised the safety of the mother or baby, it was less than optimal for an OBS unit that did over 120 C-sections in 2017.

The new system provides bright, consistent light, adjustable by the physician, and is easier and stable to position.

Mom Lauren remarked that the lights were nice and bright after staff mentioned that it had been their first usage.  “They would have been perfect for a selfie had I not been so busy,” said Lauren jokingly.  As a first time father, dad Josh said he hadn’t noticed at the time.  “I was completely focused on Lauren and the baby.”