The Gambles ‘in the picture’

Neither Reg nor Josh Gamble has ever had to make major use of the Almonte General Hospital but that doesn’t mean they don’t fully appreciate how important it is to their community. According to Reg, “That hospital is one of the major attractions for why people move to Almonte, and why people stay and live here.”

It’s that strong sense of community that Reg has always brought to the many things that he’s done since moving here in the early 70’s from Maxville, where he’d grown up.  He and wife Gail raised their two sons, Josh and Jake.  Even with his own growing funeral business, and Gail working in Ottawa as a nurse, Reg still made time to be involved in many local endeavours including the North Lanark Highland Games, the Lions Club, and chairing the building campaign for the Rosamond Unit.  Giving back to the community was given a high priority by Reg, and he has passed that value on to his son Josh. 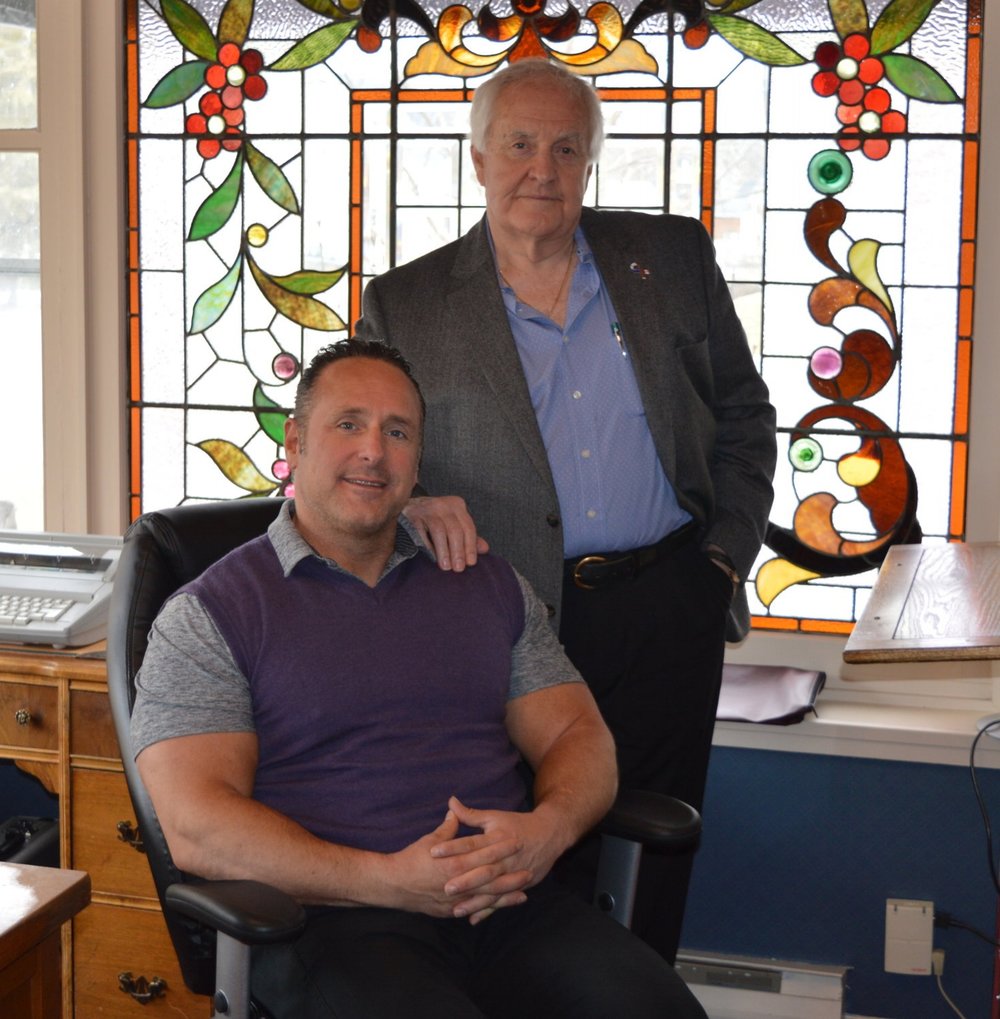 Reg proudly displays a Certificate of Appreciation from the Hospital dated 1977 to 1989, in the C.R. Gamble Funeral Home and Chapel office that son Josh now occupies on a full-time basis.  Although Reg is still involved in the business, Josh bought it in 2010 and he, his wife Stephanie and six-year-old son Aden live in the house that he grew up in, part of the Funeral Home. As would be expected, Stephanie occasionally has to pitch in and help out, and Aden is already involved too, setting up flowers or putting out cards.

The one Emergency visit that Reg can vividly remember was shortly after emceeing the local highland games, something he’s done for decades, because he had an extremely painful earache.  After being examined by Dr. Franz Ferraris, Reg was told that he didn’t have an earache but rather an inflammation of the mandible (jaw) muscle on that side of his head. This condition was probably the result of him talking a lot.  Reg was told he needed to rest the muscle for several days; to not talk a lot. Those that knew him well responded, ‘he’s going to die…!’

Josh and Reg, as well as CR Gamble Funeral Home and Chapel, have recently ‘put themselves in the picture’ as just one more way that they can give back to the community and support their local hospital.  Their five-year commitment to the diagnostic imaging campaign and continued sponsorship of several AGH events will go a long way to helping ensure patients at the hospital have access to quality patient care close to home.

f you want to join the Gambles and “put yourself in the picture” with a one-time gift, monthly donation or multi-year pledge, please contact Al Roberts, Managing Director, AGH-FVM Foundation, at 613-256-2500 or aroberts@agh-fvm.com