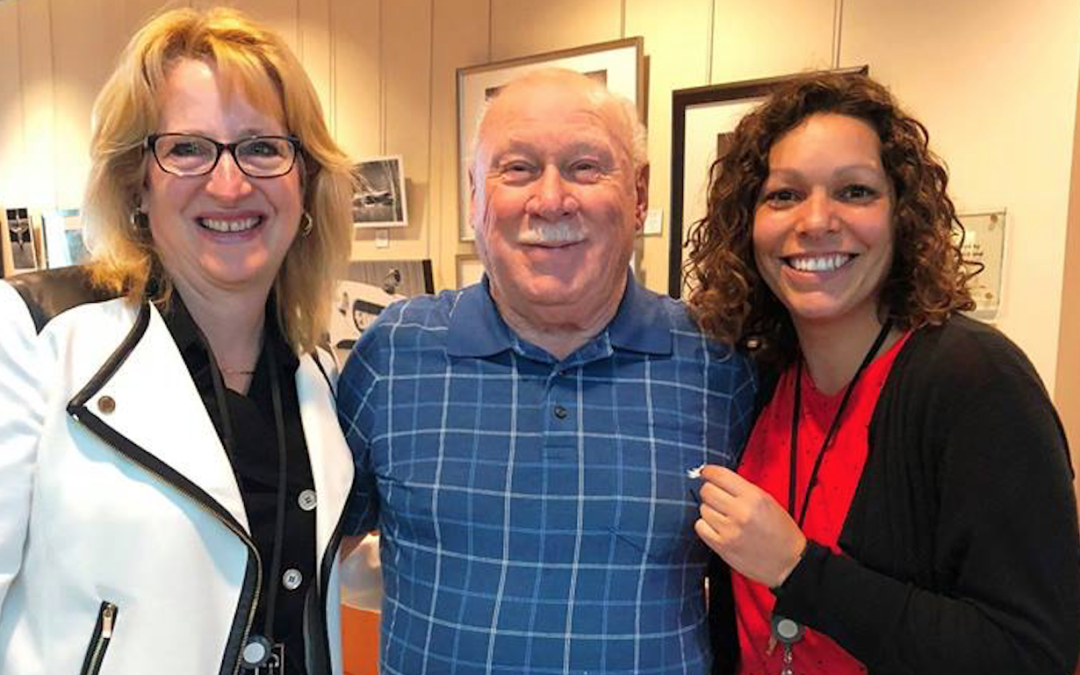 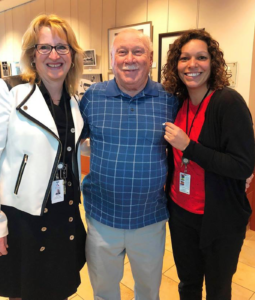 Rolly Larmour was recently recognized for his tireless support of the residents of Fairview Manor. He was awarded a Guardian Angel Pin by Karen Buness, Director of Care, and Joyce Rolph, Interim VP Patient/Resident Services and Chief Nursing Executive. The special Pin was, in part, to thank Rolly for the generous donation of a fence in the Maple Grove courtyard. The fence has increased the safety of the courtyard so now residents are able to roam freely and enjoy the gardens and nice weather. They also wanted to recognize him for all the other things he does such as helping to porter residents to events, serving snacks, talking with residents and whatever he can to help brighten their day. Thanks Rolly for being a Guardian Angel for our residents. 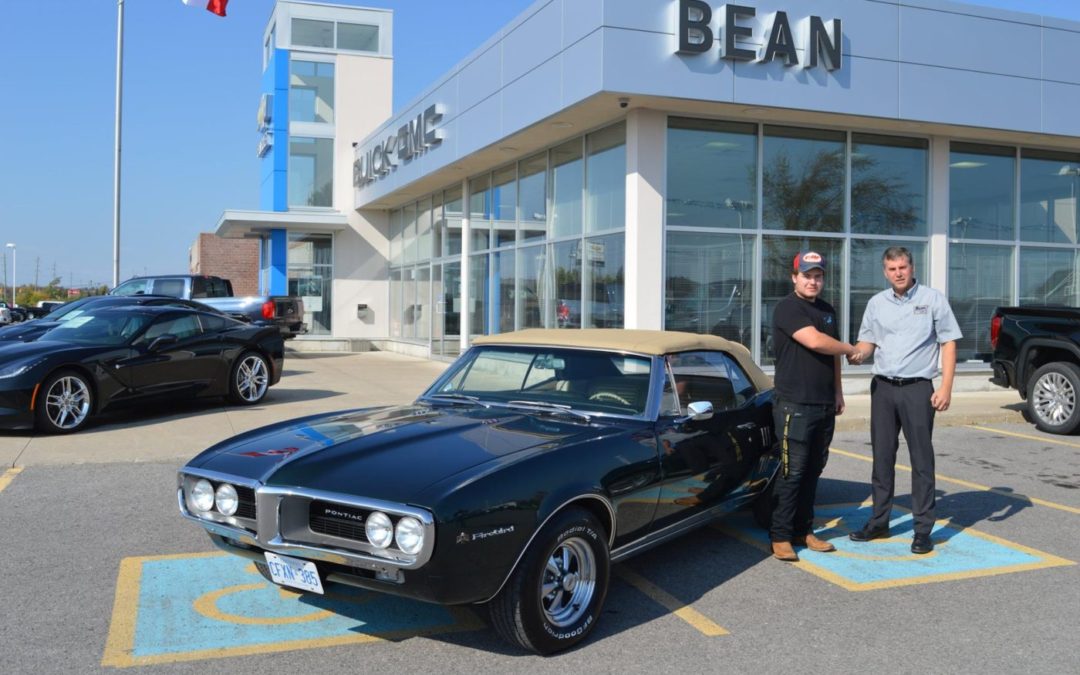 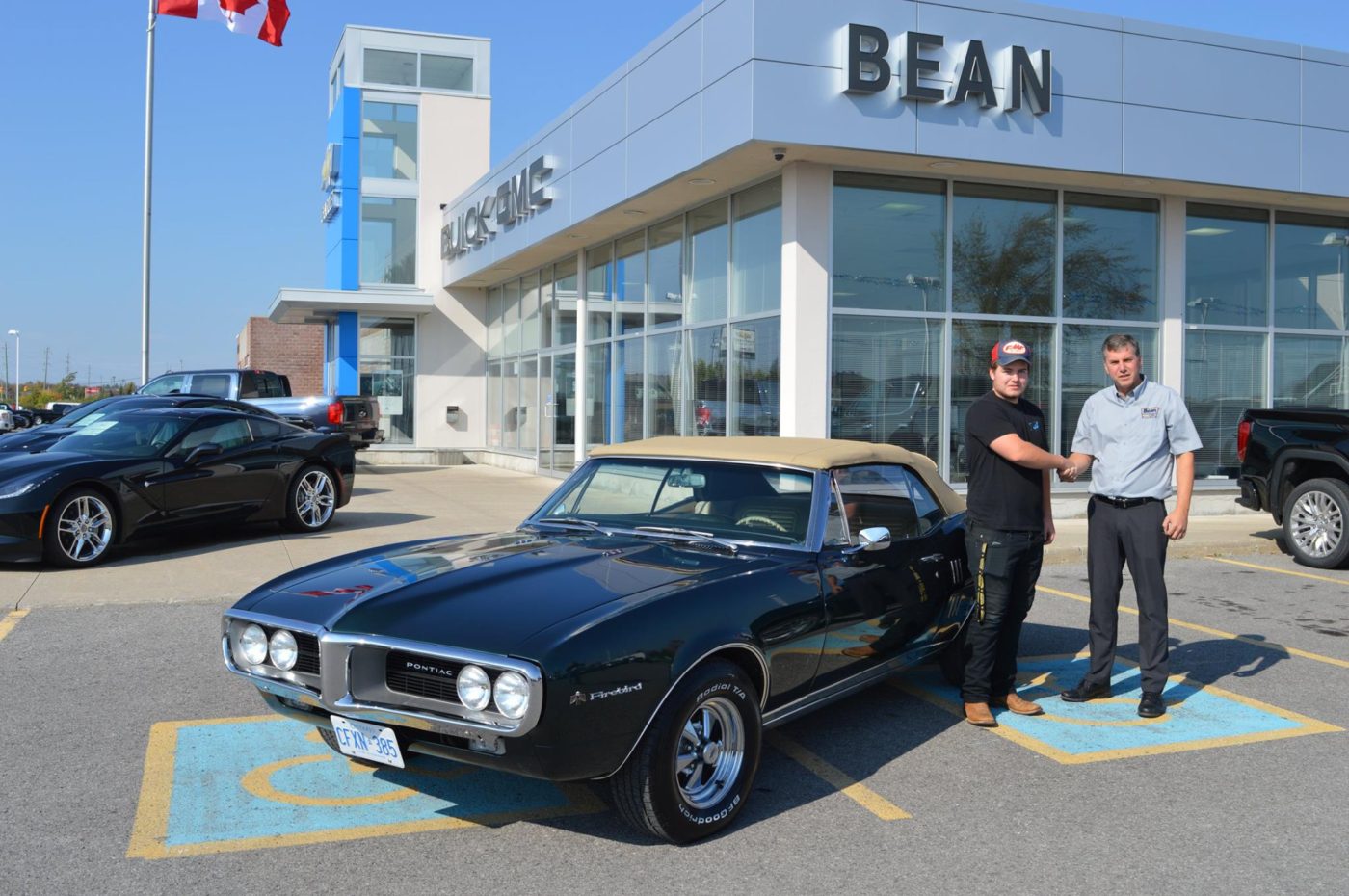 Winner Jordan Waito, today visited Bean Chevrolet Buick GMC, and drove off with the car!! Thanks everyone for your support!! 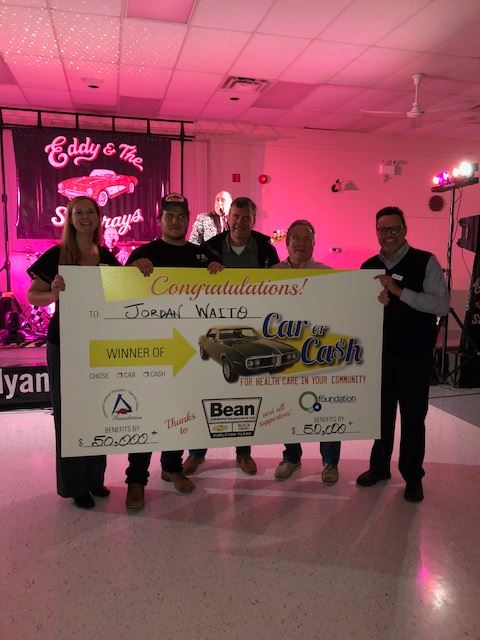 Mr. Jordan Waito of Kanata, Ontario, is the winner of the Carorcashforhealthcare raffle. Waito’s lucky ticket #00981 was drawn this evening at the Almonte Civitan Club Hall in front of a packed crowd.

At final count, 6,476 tickets were in the draw for the joint fundraiser that benefitted both the Almonte General Hospital Fairview Manor Foundation and the Carleton Place & District Memorial Hospital Foundation. Waito has a choice to take the 1967 Pontiac Firebird convertible or $30,000 ca$h. Keith Bean, owner and president of Bean Chevrolet Buick GMC in Carleton Place, donated the winning prize and was the one that drew the winning ticket.

“My dad and I bought the tickets at the Capital Classic Car Show in July at Wesley Clover Park”, said a surprised but extremely excited Waito, who along with his father Jeff, came out to the Almonte Civitan Hall after being phoned and told he’d won the grand prize. “I had a 1967 Firebird,” said Waito Sr, “and that’s why we had to buy tickets that day.”

I’m so happy how this turned out,” said Bean. “We were able to more than double the money going to these two local hospitals which was what I had hoped would happen. For our first year, it all came together well and so much of that was the wonderful volunteers that helped sell tickets throughout the six month campaign.”

“These funds will help each hospital purchase some urgently needed equipment,” said Mary Wilson Trider, President and CEO of both the Almonte General Hospital and the Carleton Place & District Memorial Hospital. “We count on community support through our foundations to put the best tools in the hands of our caring and dedicated physicians and staff. As they always do, the community has come through again for our patients and residents in a very big way.”

Carorcashforhealthcare raffle launched on April 6. Because the prize car was donated by Bean Chevrolet Buick GMC, all of the more than $100,000 generated, minus licensing fees, advertising costs etc., will be split evenly by the two hospital foundations. Dozens of volunteers sold tickets at local car shows, cruise nights, community and regional events, fairs and at Scotiabank in Carleton Place. Tickets were also sold by volunteers at the Almonte Hospital Gift Shop, by staff and volunteers at both hospital Foundations and by staff at Beans in Carleton Place.

Thanks to Eddy and the Stingrays for creating a grand prize party for all those who attended. 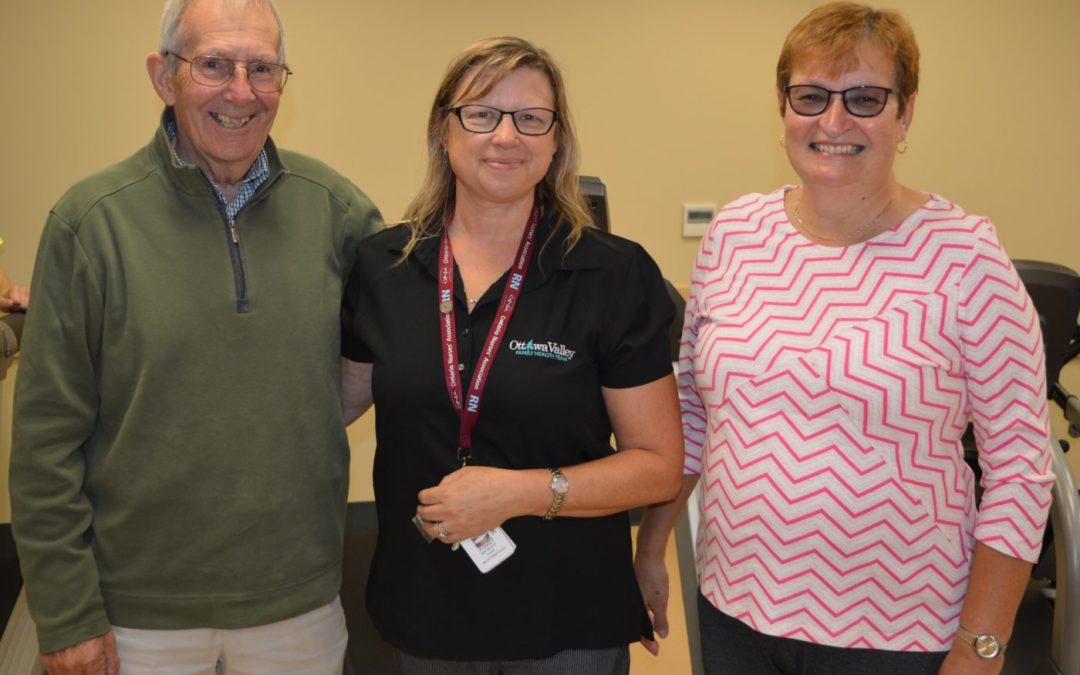 The fact that Harriet Soudant is loved by her patients was abundantly clear when she was surprised with a Guardian Angel pin from Richard and Bonnie Love. They believe that Harriet’s care gifted Richard with a quality of life he never thought he could regain. It is obvious that she has a place engraved on their hearts. 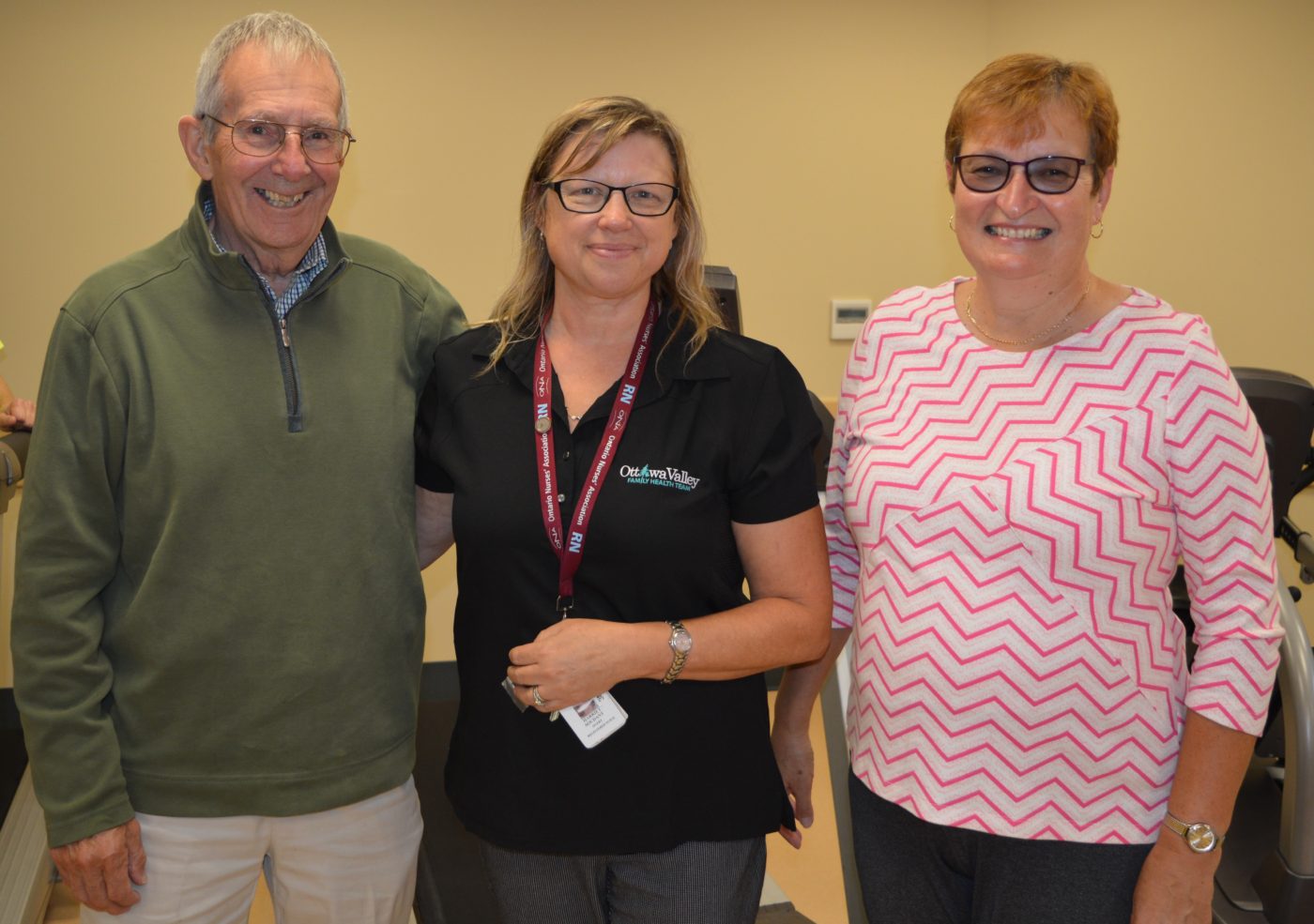 “Her support and encouragement have been instrumental in helping Richard regain his quality of life after heart issues created problems earlier this year. She has supported above and beyond the call of duty providing coaching and emotional support during the past few months. This has resulted in a much greater recovery than anyone expected. Harriet, thanks for being such a key member of the team!” Richard and Bonnie Love

As a result of the tornadoes that ravaged West Carleton recently, the Almonte General Hospital Fairview Manor Foundation and the Carleton Place & District Memorial Hospital Foundation are adding a food drive to the Grand Prize Draw of the Car or Ca$h for Health Care raffle taking place this Friday, Oct. 5 at the Almonte Civitan Hall.

Attendees to the draw and community members are encouraged to bring non-perishable food such as coffee, rice, salmon, and canned fruit and tomatoes to the draw event which begins at 5 p.m.  Keith Bean, of Bean Chevrolet, Buick, GMC, will be providing a truck to transport the food donations to the West Carleton Food Bank on Saturday morning, just in time for the Thanksgiving Weekend.

Food donations can also be dropped off at Bean Chevrolet, Buick, GMC in Carleton Place or the Almonte General Hospital on Friday up until 3:30 p.m. 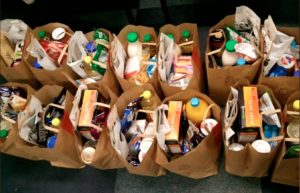 The Grand Prize Draw event for the Car or Ca$h for Health Care raffle will take place at 8 p.m.  Doors open at 5 p.m.  A Ca$h BBQ and bar, performances by Eddy and the Stingrays and vintage cars will round out the evening.  This joint fundraiser for the Carleton Place & District Memorial Hospital Foundation and the Almonte General Hospital Fairview Manor Foundation, features a grand prize choice between a 1967 Pontiac Firebird convertible or $30,000 Ca$h, both donated by Keith Bean.

Tickets for the raffle are $20 for one or three for $50 and are available at Bean Chevrolet, Buick GMC in Carleton Place, the Almonte Hospital Gift Shop, the CPDMH Foundation office, and at Scotiabank in Carleton Place. Entrance to the Grand Prize Draw event is $10 if you already have a raffle ticket and $25 if you don’t (this includes a raffle ticket).